When you stand 45 miles south of the border with a sign that just reads CANADA, there’s no telling what might happen.

We got a ride to the town of Richfield and walked for two miles through nothing but cornfields to what appeared to be a McDonalds drive through… minus the McDonalds. Underneath a yellow arch and a Canadian flag, we spoke with a woman through a drive through window.

She really didn’t seem sure of what to make of us. She didn’t ask the usual questions, but stopped us as we explained all the American wine and groceries in our bags to say “No, just what you have with you right now.” Somehow, we made it across yet another border without being searched.

We walked into Canada singing the national anthem in off key ecstatic voices. There was no town to say we were in and the road wasn’t on our map. A car passed by maybe every 5 minutes or so. We prepared ourselves for a long wait, but then ended up getting a ride within 20 minutes.

As I ran up to the passenger side window, the man inside began speaking to me in rapid French and I froze. 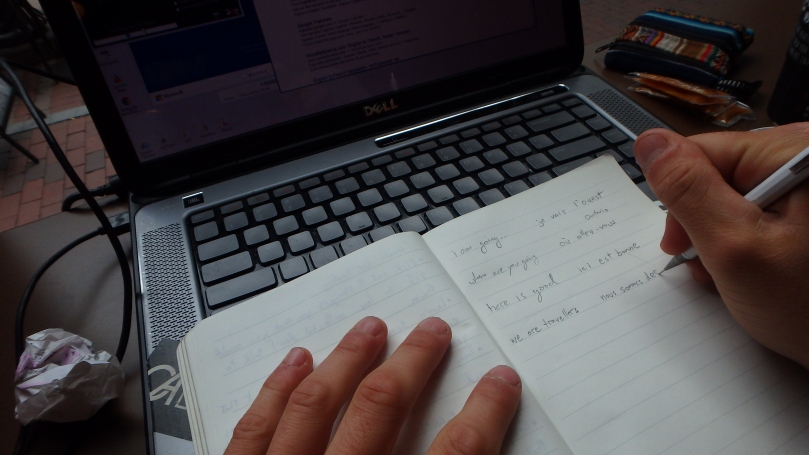 That morning, in a Burlington, Vermont coffee shop Adrian and I googled ourselves a mini phrasebook, which included things such as “Where are you going?” and “I don’t speak French.” With nearly 2 dozen vocabulary words, we considered ourselves prepared for Quebec. Although we didn’t know where we’d be crossing the border, we knew it would be somewhere in La Belle Province. We just assumed that it might be somewhere a little larger, with a little more English spoken.

I struggled through a “Je ne parle pas français” and thankfully, the man in the car responded, “English? I can take you to Sutton. That’s the first town.” He was a physician who works in the States but lives in Canada. He picked us up because in 20 years of driving that road every day, he had never once seen a hitch hiker. Coincidentally, at the other end of those 20 years, his best friend had been stabbed to death by a hitch hiker. He was glad to hear that Adrian was an engineer. “Good, we need more taxpayers.”

At the gas station he left us at, we made ourselves an OUEST sign and bought hotdogs. I was so nervous that I almost walked out the door without paying. The cashier told me some numbers and I handed him a 20 dollar bill, hoping he wouldn’t ask me how my day was or anything. In the parking lot, we managed to explain to an old guy with a ridiculous beard-and-bandana combination that we were from Vancouver and had hitch hiked there through the USA, in French and hand gestures. A young girl saw our sign and told us “West is that way,” pointing in the cardinal direction, despite there being only one road in and out of the town, which ran north and south.

We walked out of town and that’s where we met Kevin and Kevin. They spoke not a word of English and our small collection of phrases written in my notebook weren’t helping much. Despite our inability to communicate, the ride was very memorable. Among the highlights were how they honked at every single person walking on the side of the road, the U-turn that included them driving right over a curb into a parking lot (and the big box truck following them for some reason that copied the maneuver), and the moment in which they flirted with the girl stopped at the light next to them while talking with a girl who they’d phoned off a scrap of paper with a name and number written on it. They dropped us off at a highway junction and said something we couldn’t understand, pointing down the road.

We had no idea where we were and there were no signs of significant civilization in any direction. There was, however, a patch of trees across the road and the sun was going down, so we bushwhacked our way in and roasted ourselves some hotdogs.

The next morning we scored a ride across the St. Lawrence with a young guy who could speak a solid amount of English and our adventure in foreign language hitch hiking was over. Thank you, Quebec!