Her voice came through the satellite phone sounding strange. Like it held emotions so big that they couldn’t possibly fit through the small holes in the speaker.

“It’s so good to hear your voice,” we told each other. Then awkward silence. What do you say to someone who you’ve spent hours and hours searching for, while not expecting to find anything more than a body?

It came out before I could think about whether it was true or not. That’s totally out of character for me. I couldn’t handle any more in the way of coherence, so I handed the phone to the nearest person and returned to pulling at my hair and clothing while pacing all around the rescue boat.

That was the first time I’d said “I love you” to a person in about a year. (I had often found myself saying it out loud when I was alone, but I think that was only because I missed the feeling of the words rolling around in my mouth.) After I had my heart broken for the first time last March, I thought through every person I’d ever told that I loved them, and I decided to take most of them back. I hadn’t known that it was possible to hurt so much. In my broken state, I thought that if this is what if feels like to love, then I have never been in love before. At the time, I thought I would never be in love again.

While I waited for the helicopter to come pull my friend off of the top of the mountain peak she was stuck on— the longest 2 hours of my life, although longer for her, I’m sure— the words played on loop in my head. Were they true? I’d only known her a month, and it had been so hard to connect at first. Eventually I decided that yes, they were.

Suddenly I realized that love is so much more common that I had ever believed it to be. I have loved many, many times in this past year. I thought about all the people who I really didn’t want to be lost, alone and scared like my friend was— family, friends, people I’ll probably never see again. I love you all.

If you’re wondering if that includes you, then if probably does. But you’ll probably never hear it from me. I’ve always found those three words, although I crave their truth, terrifying to say. It’s basically letting someone know that they have the power to hurt you deeply with only words or simple actions.

But what happened with my friend that day was so far beyond words or simple actions. Where she got lost was about 150km from the nearest civilization in any direction. She was not prepared for the cold and wet climate. And she was so far from the boat that we never would have found her without the heat-sensing plane that came to our aid thanks to many miracles of modern technology. If it weren’t for the Chilean Armada, she would absolutely be dead by now. She had a VHF radio that she wasn’t responding to our calls on, so for all we knew, she was already gone when we started searching. We were picturing her fallen off a cliff with a split skull, floating facedown in shallow water, or hanging from a tree. Whether or not she would accept and support me as a person in exchange for how I accepted and supported her was not an important question. Would I ever see her again? Would she continue to exist? Those questions hurt so much to ask. But I trusted that she would not hurt me on purpose. So I let her know. I told her that I love her.

As I thought through all the people I love, of course I began to think about places I love— Horseshoe Bay how it was 10 years ago; the far side of Mushroom Island in Tofino; the town of Rossland, as-seen from the top of Red Mountain on a sunny day; the street outside my farm in Oregon, where you can see clouds resting on the sides of the valley and everything shines with dew in the early morning light; and, of course, Patagonia. Patagonia is a lot like love itself— equal parts infinitely beautiful and powerful.

For this whole trip, I have been trying so hard to maintain the respect for Patagonia that it deserves. It’s dangerous— everyone tells you that. The winds can blow as much as 100 knots, rain falls so thick that you can’t see anything, rocks lurk below the glacial silted water, often uncharted, spear-shaped chunks of ice drift furtively along, and the damp cold will get inside your bones with no plans to leave. But the biggest danger of Patagonia is its size. The vastness of it all will make you feel so small. It will humble you until you slip off the bottom edge of importance. We are just tiny animals who never belonged here anyways.

While I searched for my friend, I kept going back to a memory of her and I. It took place only 2 weeks before she went missing. The moon had just eclipsed the sun and we were sitting in the dinghy, staring up at the face of an enormous tidewater glacier, slowly floating out to sea with the bergy bits. I had my foot over the side with my rubber booted heel in the water.

To my friend, I quoted Leonard Cohen, “We are so lightly here.” 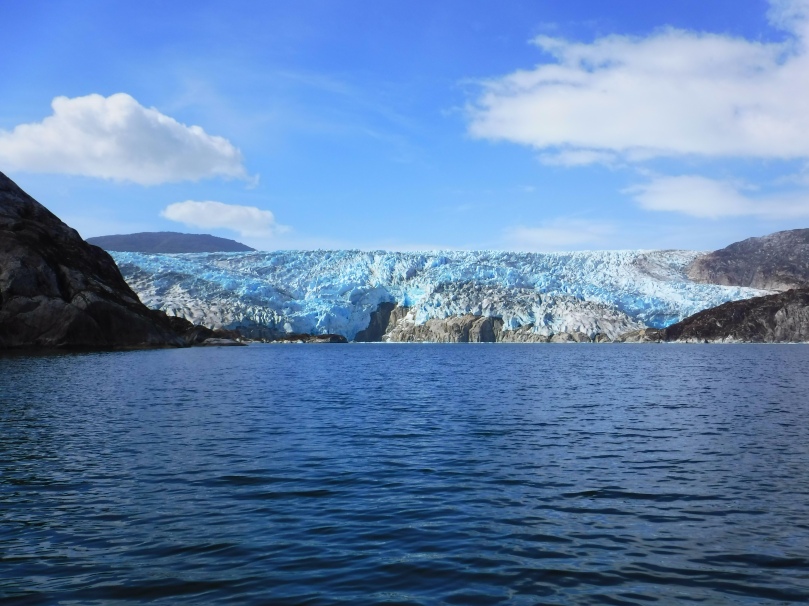 We were totally fine, but only because of a few centimetres of plastic between our bodes and water. If anything were to happen to our little boat, we would not be okay. But that didn’t exactly feel real. Trouble is thought of as something that other people find in the wilderness. It’s hard to remember that someone has to be the other people and that there’s no good reason why they won’t be you or the people you care about.

It’s important to remember that just because you have managed to get yourself somewhere that it doesn’t mean you belong. The sad truth is that most of humanity— myself and almost everyone I know included— is so far detached from nature that the wilderness is not a place we can survive unprepared. It’s not a world that has ever or will ever belong to us. We’re only guests. We must be on our best behaviour.

My friend was taken to Puerto Natales by the helicopter— about 150 nautical miles for us to sail. After catching up a little on lost sleep, we began the trip to meet with her. We went as fast as we could, but it was very difficult. We experienced our first real storm, which we waited out in a caleta with lines ashore in every direction. I was looking at Patagonia in a new way. I didn’t have to force the respect. I felt it. Patagonia almost took my friend from me and from the world. The danger isn’t just stories any more. It’s real, and I will never be able to forget that.

My friend is now on her way back to her home country to be with her family. She is emotionally destroyed, but physically fine. The reason for the lack of details about the incident itself is out of respect for her. I don’t want to sensationalize her experience, but I do want to share the lessons I’ve learned from it— about love, about the wilderness and about beauty. About living life past where the trails end.

While I walked through the forest, searching for my friend, sifting through tall grass and shouting her name from the tops of mountains, I couldn’t help but notice how beautiful my surroundings were. From the multi-coloured mud on the plateaus, to the millions of plant life species spilling out from the valleys, to the bare stone peaks, to the perfect reflections of all of this on the still surfaces of the ocean on one side and a lake on the other. I felt awful about it. How dare I appreciate the wonders of nature when my friend was out there somewhere, needing to be found?

But that just serves to demonstrate how amazing this place is— its beauty can lift you from the darkest moments and demand your attention. But that’s just another layer to its power. It will seduce you and lead you astray, past the end of the trails, and past the limits of where you were ever supposed to be. That’s why I’m continuing on this journey, all the way to Puerto Williams. Although I think all the time now about how much danger surrounds me, and how there’s no logical reason for me to be here, I can’t stay away. I’m in love.