The last thing I blogged about was Christmas. What’s left of the aspiring professional in me wants to catch up, but I’m not going to do that. That’s because I really don’t want to write about New Year’s Eve, which is a story I told to someone and heard “Wow, that’s almost Bukowski-level” in response. I also don’t want to write about the endless, anxiety-ridden weeks of waiting for the boat, Otra Vida, to arrive in and leave again from Puerto Montt, even if they did feature a few really good hikes. And I definitely don’t want to write about the tense hours spent passing a “talking stick” around a circle in the boat’s cabin, after which I became the only remaining sojourning crew member of Otra Vida.

What I do want to write about is the passage across Golfo de Corcovado.

Shortly after 3am, I woke up to the sounds of a hissing coffee pot and a rattling anchor chain. I climbed out of the v-berth and into the warm clothes I had laid out the night before, steamed some milk and poured matching lattes for Martin and I, handing one to him just as he’d finished pulling up the anchor and was putting to boat into gear.

The reason for the early start was a favourable tide, paired with a forecast for 15 knots that was supposed to build overnight and die down by midday, but the wind reader just flicked between zero and one. It was a new moon and clouded over, so beyond the glow of the navigation electronics, the world was pitch black. We set a course for open water on the gps, putting literal blind faith in the charts.

It was a shame that we had to run the engine, shattering the perfect tranquility of the night, but we had a gulf to cross, wind or no wind. The autopilot had the steering covered, so I went up front to where the roar of the engine was dulled and the bright screens in the cockpit didn’t consume my attention.

As the bow carved through the calm ocean, specks of bioluminescence appeared like aquatic fireflies scattering in fear. I watched the sparkling foam of our wake for almost an hour, completely transfixed, until I was interrupted by the loud smack of something big hitting the hitting the water not too far away. There was another smack just a few seconds later, and I saw a faint burst of light as the water splashed. Then there was another. Then another. The animal did a full loop of the boat before disappearing, although it had never really appeared.

Soon we emerged from the shelter of Isla Grande de Chiloé, at about 4:30, and a perfect 13 knot breeze built across our starboard beam. We set the sails and turned off the motor. The silence was beyond blissful, and we were flying along at almost 7 knots— faster than we had been moving with the motor. Not bad at all for a cruising sailboat. The swell was gentle, but there was enough to fling up just a little bit of spray, which was still full of twinkling bioluminescence.

For a little while, the sky began to clear, and a magnificent strip of milky way was revealed between parting curtains of inky cloud. I stood on the stern and watched the dark triangular silhouette of the mainsail move back and forth over the stars like the finger of a giant who was learning to read them.

It was all too impossibly perfect to last, though. We saw the squall coming on the radar, so I ducked down below to don my newly-purchased rain gear. Apparently it was time for the test drive. It held up great and kept me warm as I sat huddled in the cockpit, only occasionally getting up to adjust a sail. It was wet, but hardly miserable. We were making great time. The wind built up to 19 knots with enough swell to make it slightly difficult to fix a cup of tea, and it became a good idea to reef the sails in a little. Martin assured me that this was entirely casual.

And in the middle of all this wind and water, as the sun rose, my lovely personal chef/ co first mate (don’t call him captain, or he’ll be mildly annoyed), whipped us up a breakfast that looked like it belonged in a fancy restaurant— scrambled eggs with red pepper and onion on pan-fried bread (homemade fresh the day before), topped with parmesan cheese and fresh ground pepper.

All this happened before 8am. In the afternoon, when land was near, but not near enough to see clearly, I decided it was time for a nap. When I awoke, I found myself in an entirely different world from the one we’d left so very early that morning. The rolling pastoral hills, full of grazing animals and simple wooden churches with tall steeples that made Golfo de Ancud a beautiful place were things of the past. Now, tall mountains rose in every direction, covered in brilliant green foliage. Having lost the wind again, we were motoring down a channel and almost at the anchorage we’d selected off a map earlier.

Around the corner of a protective islet, we dropped anchor in a picturesque cove. We ate a light dinner of more fresh bread, hummus, artichoke hearts, cheese, and white wine, then got in the dinghy to explore the nearby lagoon. We climbed on rocks and I watched shore crabs scuttle around under the crystal clear water, threatening each other with their tiny pincers. 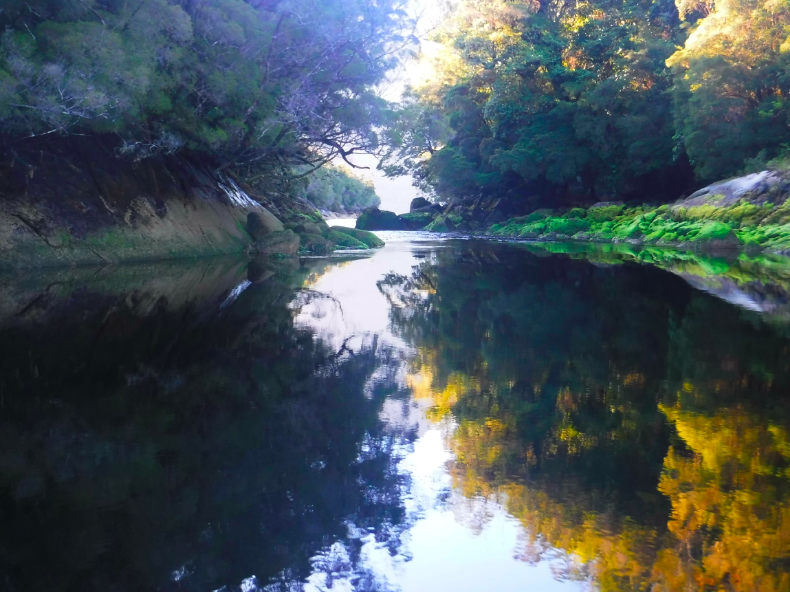 And now I’m sitting in the cabin, thoroughly enjoying the time it has taken to write this. I’m filled with gratitude for how this is now my reality each and every day. The sun is setting over the mountains, colouring the sky a light purple, and now I get to have a full night’s sleep, wake up, and do it all again.

One thought on “Night Sailing”